To the casual observer, Port Phillip Bay may look like a big blue piece of water, but if they keep looking, one can often see lots of wildlife that call the bay home.

In this article, we are going to give you an overview of what you might see - above, on and below the water line. The wildlife mentioned are just a drop in the ocean compared to the reality.

NB. Species marked with a * have been discussed in a separate commentary under the ‘Interest Articles’ tab on the Bay Fish N Trips website. Several more will highlighted in the future. 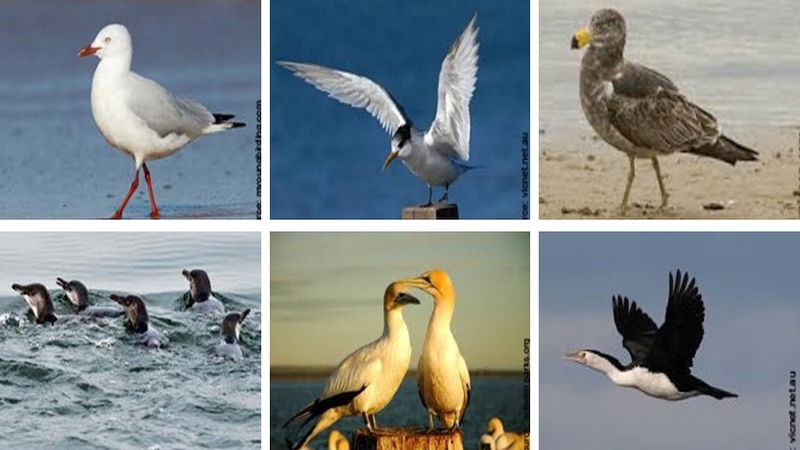 Above the surface, many different types of sea birds can been seen either flying high in the sky, resting on the bays surface or along the shoreline. There are 29 different types of sea birds found along the Mornington Peninsula shoreline, and lots more if you looked across the entire coastline of Port Phillip. Some of the more common species seen in our area are Seagulls (mostly Silver and Pacific Gulls), Terns, Cormorants*, Australasian Gannets, Pelicans and Penguins. Vulnerable species like the Hooded Plover can be seen in the southern coastal areas on the peninsula. 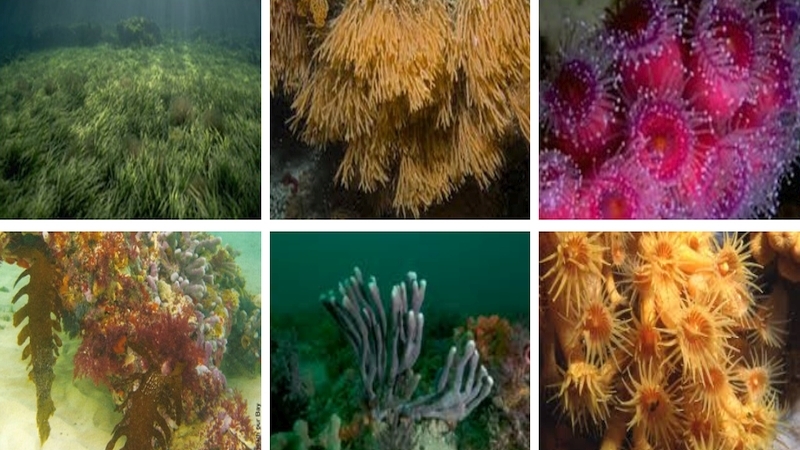 As we move below the bays surface, a whole new world opens up, displaying a colourful, vibrant and busy community. There are hundreds of animals and a variety of plants species.

Starting at the sea floor, you can find a range of Seagrass, Sponges and Soft Corals. Although they all look like plants, only the Seagrass is truly a plant, whereas the other two species are actually classified as animals. The Seagrass is mostly green. Coverage was destroyed a few years ago when dredging to deepen the bay in selected areas took place. Grey muddy sludge was piled high on the Seagrass beds killing hectares of it. It took several years for the grass to recover. You will be pleased to note that it is back to a healthy state now. Sponges and Soft Corals are usually located on structure (in and around jetties or rocky outcrops). These may look like pretty plants but they are actually classified as animals. Many underwater photographers have captured their vibrant colours. On board the Plover, we have often seen them with our underwater camera. Importantly, all of these species act as the filter system of the bay to keep it in good condition and provide much needed shelter for the sea creatures (especially the smaller ones). 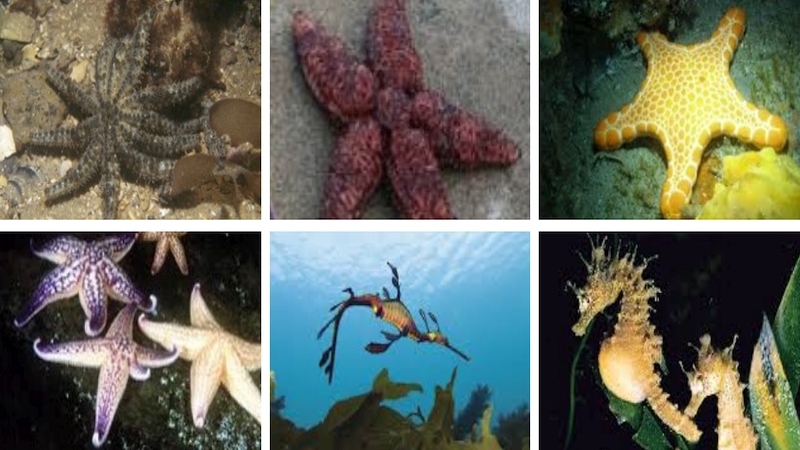 The Starfish and Seastars jump out at us next. What is the difference you might ask? Answer: nothing. In basic terms, Starfish are often called Seastars by scientists, as these animals are not fish. One of our favourites it the Eleven Armed Seastar* and also the Biscuit Starfish, which a colourful pentagon shaped animal. Sadly the destructive Northern Pacific Seastar* was introduced into the bay a few decades ago and has increased in numbers over time.

Sea Urchins are native too but currently there is an overabundance of urchins in northern and western areas of the bay.

Sea Dragons and Sea Horses (the first has a bony appearance while the latter is quite leafy looking) are notable species of Port Phillip. Prior to the Mornington Pier being reconstructed, there were 12 different species of these magnificent creatures seen there. Numbers were reduced but they are slowly returning. 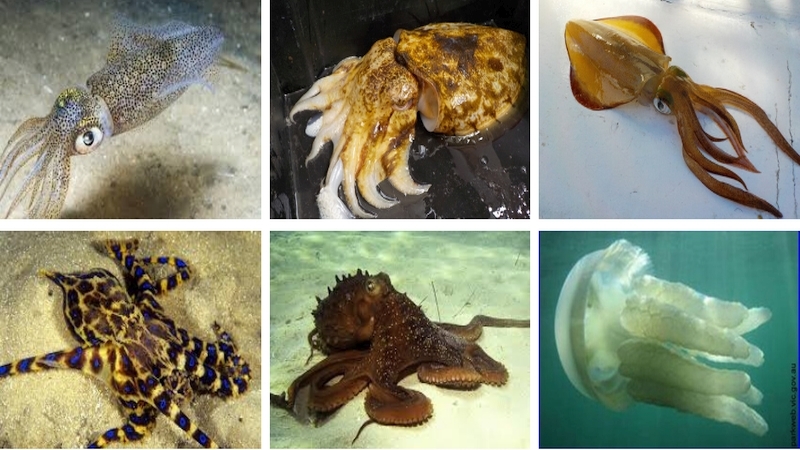 Jellyfish are often seen swimming around Port Phillip, especially as the water temperature increases over summer. There are many different species, including the Blue Bottle that has a rather nasty sting. The Blubber Jelly fish can often be found washed up on beaches after a storm.

Cephalopods! Easier to say Squid, Calamari, Cuttlefish*and Octopus. They are in large numbers too! Port Phillip is a nursery for Squid, Calamari and Cuttlefish and at different times of the year this is more than apparent with many recreational fishermen catching their bag of 10 on a daily basis leaving black ink stains on many piers around the bay. Their life cycle is relatively short but they tend to lay an exceptional number of paralarvae or eggs, to help their species survive long term. Octopus are caught as often. They are said to have up to nine brains, are very smart and highly organised. 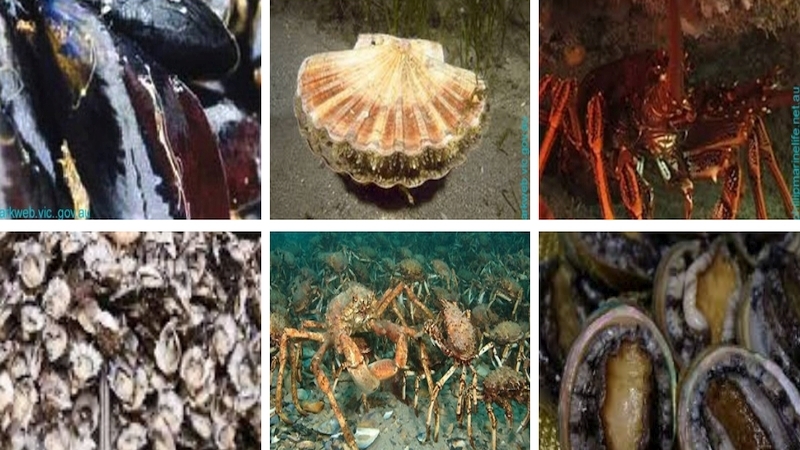 Mussels, scallops and oysters are also located in the bay. Several large leaseholds are located around the bay (Geelong, Mornington-Mt Martha and Safety Beach) for growing Mussels commercially. The native species were virtually wiped out over time but efforts are being made to repopulate reefs and some of the Mussel Farm operators are experimenting with the production of native scallops and oysters too.

Crayfish used to be in enormous numbers but sadly this species was decimated many decades ago when they were pillaged and turned into garden fertilizer and pet food. Obviously our forebears had no idea what a delicacy they were.

The bay is home to a variety of crabs such as the Sand and Red Shore. They can be up to 7 to 10 centimetres in width respectively and are often found in the intertidal zone. The most notable species to be seen in the bay are the visiting Giant Spider Crabs. Each autumn there is a mass migration of this species from the deep southern ocean waters into Port Phillip. They gather in the shallows, often near Blairgowrie, to moult. This annual occurrence has become a global phenomenon. 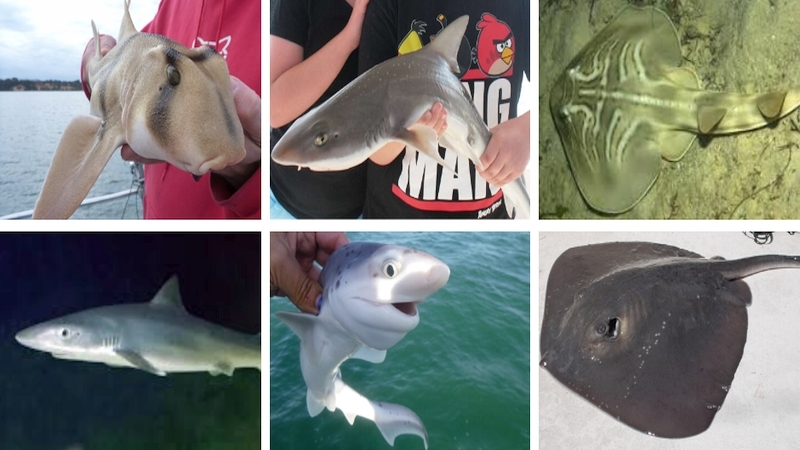 Numerous Sharks* are found in the bay. Notable species are the Gummy, Seven Gill, School, Banjo and Port Jackson Sharks. On the odd occasion a White Pointer or Hammerhead has been seen. Such magnificent predators of the sea. Interestingly, their skin is smooth in one direction and like sandpaper when rubbed the other way. The facial expression on a person, young and old, bringing their first shark to the surface is great to watch. A smile soon turns to a grin. For some, a happy exterior is masking an inner fear “shark, a dangerous man eater”.

Rays and Skates* are a popular animal to be sighted, especially in the shallows along the shoreline or next to jetties. They are the puppy dogs of the seas. Magnificent creatures!

There are over 300 species of fish in Port Phillip. Snapper*, King George Whiting* and Flathead* are the most known, but other less famous species are equally prevalent and as a table eating fish, wonderfully delicious. These include Yellow Tailed Scad*, Jack Mackerel*, Australian Salmon*, Leatherjacket, Red Mullet, Snook, Trevally and Wrasse (just to name a few of the hundreds in the local waters). The bay is one big fish tank, full of life and colour as each fish species endeavours to live out its lifespan and continue its existence with the production of the next generation. We love to see the expression on the faces of people, both children and adults alike, when they catch their first fish ever. It is a look of pure joy! To sustain such a bountiful bay, it is important for all fishermen that they follow the guidelines put out by Fisheries Victoria. Future fish stocks depend on us. 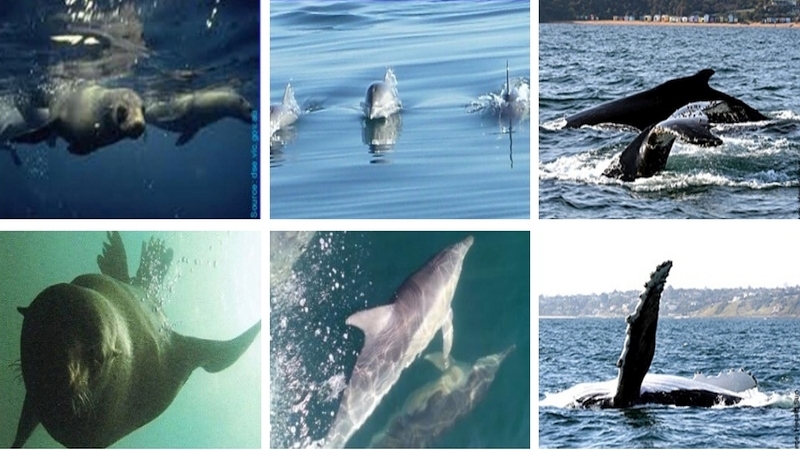 Finally the mammals of Port Phillip.

The bay is the residence of a large group of Seals*, mostly Australian Fur Seals. They are playful animals with a sense of humour second to none.

Dolphins* are here too. Fascinating animals! The two main species are Bottlenose and Common Dolphins. Usually the latter don’t stay in one place for long periods but there is a unique pod (Esther’s Pod – with Esther being the matriarch of the family) that calls the area between Mt Eliza and Mt Martha home. The Plover has been graced by their presence on many occasions. They will often be seen chasing down the Plover, to play in her bow waves to the delight of all on board. Such a privilege!

Whales can been seen coming into the bay in small numbers annually, during their migration to the warmer waters off the Queensland coast, where they intend to calve. The whales don’t stay for long in Port Phillip, but are still very exciting when spotted from the shore or from a boat.

Port Phillip Bay is more than a body of water. It is the home of an enormous variety of wildlife, some of which is mentioned above. The bay is said to be one of the largest enclosed spaces of saltwater in the southern hemisphere and one of the most bio diverse pieces of water on our planet. Such a gift!

Information was sourced from: Bay Fish N Trips, Wikipedia and Fisheries VIC. Specific species that have their own interest article on the Bay Fish N Trips website are noted throughout this article with an asterisk symbol (*).